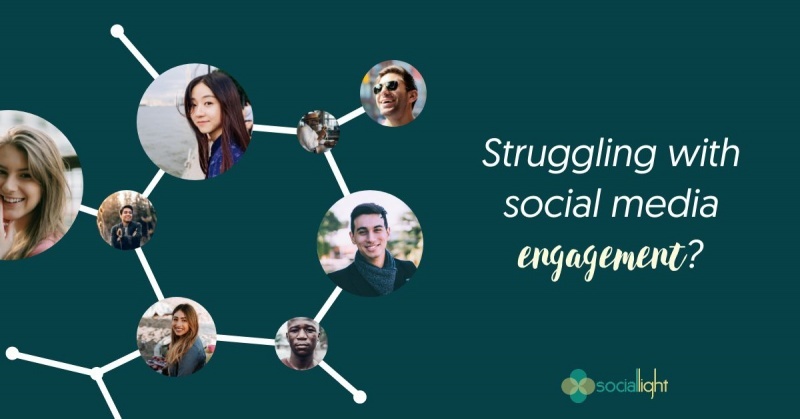 Social media has been in a funny place since the start of the pandemic. Back in the spring of 2020, engagement soared. As people began to isolate, social media became a lifeline to stay connected.

Yet as the months passed, social media quickly started to feel like Zoom. Yes, it was a lifeline, but you could become quickly exhausted by it.

This year Facebook has had a growth rate of less than 1% – its slowest growth ever. In fact, the growth of most social platforms have dramatically slowed down in 2021.

Facebook is also seeing a decline in time spent on the site. Back in 2018, Facebook users spent an average of 58 minutes on the platform every day. In 2021, that’s gone down to 33 minutes. That’s almost a 50% drop!

Despite these declining numbers, social media has been one of the most requested projects here at Social Light.  As we’ve worked with a variety of different businesses on social media, we are seeing benefits of posting regular content, but it’s not always in engagement.

That has made me wonder: is it just small businesses, or is engagement hard for everyone?

As the majority of Social Light’s clients are in the B2B space, I started tracking a couple social media influencers that have a marketing spin to their offerings to see how they compared.

Listed by Forbes as one of the Top 50 Social Media Power Influencers, Amy Porterfield was known early on for her Facebook marketing skills, and offers a lot of classes on using automation to create sales and passive income.

The vast majority of her social media posts are either videos or links to blogs, podcasts, or events. Historically, this seemed to work for her as in the fall of 2019, Amy got anywhere from 100 to 2,400 likes on her posts.

She was maintaining her posting schedule and sharing several times each day, but her engagement had dropped to somewhere between 20 and 200 likes. That may still seem like strong performance, until you take into account that the 329K followers. That means that even with 200 likes, she has engaged less than one percent of her audience (.06% if you want to be exact).

In September of 2021, a scroll through feed shows that most of her posts are getting 20-30 likes, and she’s dropped down to posting no more than once a day.

Funny fact: the posts that are making the biggest impact have nothing to do with business. It’s usually a shot of her dog or personal life that sees the most engagement.

Amy’s Instagram isn’t all that different from her Facebook – though she does show a bit more personality and personal items, and her engagement seems better for it.

She also seems to have a lot more stand-alone / motivational content – possibly because she can’t include direct links in her Instagram posts.

With this mix, Amy’s posts average out at about 1,000 likes, though it’s not uncommon for a post to get up to 3,000  likes. With a following of 276K that means she’s regularly engaging about 3%, which is much higher than her Facebook content, but still pretty low in the grand scheme of things.

Also worth noting that back in 2019, her average number of likes was closer to 2,500 per post, and there were regular surges in 5K, 6K and even 9K range.

Marie Forleo walks the line between marketer and lifestyle influencer, and I’ve had half a dozen clients call her out as an example of someone they want to emulate.

For the better part of last year, her content was almost exclusively videos – often videos that lived on YouTube, rather than original content created for Facebook – and her engagement suffered for it.  200 likes was now the average, rather than the low side of her range. When you do the math, she was engaging only 0.3% of her 650K followers.

As of February 2021, she seems to have changed her game, and is doing more of a mix of content, including a good bit of personal photos and motivational content, which has caused her engagement to spike back up to pre-pandemic levels.

This goes to show that you can’t be complacent, and need to keep experimenting and adapting your content to resonate with your audience.

That said, even for her posts that get 1,000 likes, she’s still only engaging 1.4% of her followers.

Still solid, but a huge difference between the platforms.

Social media marketing can be a powerful tool, but even some of the top business influencers are struggling to really engage their audience.

That may give you comfort, but don’t let it make you lazy.

In times like these, it’s worth remembering that it’s great to be “liked,” but that may, or may not, help you meet your goals. Never forget that social media strategy starts with goals, which may range from increasing sales to establishing yourself as a thought leader.

When you want to measure your success in social media, look to your goals, and figure out your own benchmarks for success.