close
If you’ve read up on how to leverage LinkedIn to grow your business, then you’ve heard about how important it is to write a personal message when connecting to people, rather than sending the generic request.

But here’s the thing: all messages are not equal.

What might seem like a good idea to you, can come across as downright odd. So in the spirit of learning, let’s break down some mistakes people make on LinkedIn.

A friend, who is a copywriter, shared this with me. She has nothing to do with the construction industry, which means the person reaching out was copying and pasting a message without paying attention to the details.

When your efforts at customization are clearly inaccurate, you lose all credibility.

And while not the biggest mistake, I’d raise my eyebrows at someone with 2,000 clients. The irony is they are likely including that to build credibility, but it would make me wonder how much attention I’d actually get if I’m mixed into a client based that large.

This one comes from another friend who says they have zero mutual connections. When she shared it with me, her comment was:

People are just so so dumb.

Don’t be too generic

At a first glance, this one doesn’t look so bad. It’s creative, I’ll give him that, and there’s a clear call to action.

Where he fails is that he’s trying to goad me into a meeting, but doesn’t tell me what it’s about. I’m busy. You’re busy. None of us have time to take random meetings that are likely nothing more than sales pitches. If you want my time, you’re going to have to give me a compelling reason to take the meeting.

Plus who builds a relationship by asking for a cut down?

On a similar note, this one is too generic and doesn’t provide any value to me.

Why is he expanding his network? Is he on a business development kick? Trying to learn? Does he think I can help him?

And why did he specifically ask me to connect?

I’m all for making connections through LinkedIn, but I want to actually make a connection, not build a “network” of random people.

If you heard something nice about me, saw me speak or read one of my tips and want more, that’s awesome. I’d LOVE to connect with people interested in learning more about marketing. But tell me why.

In this case, I accepted a generic request and tried to see if it was worth building a relationship.

I accepted the request from Crystal, but got a message from Diana.

They seem to be treating this much like you would a customer service email, but if I don’t know who I’m going to get when I send a message, how can I build relationship?

And what the heck does “connect on a networking level” mean? 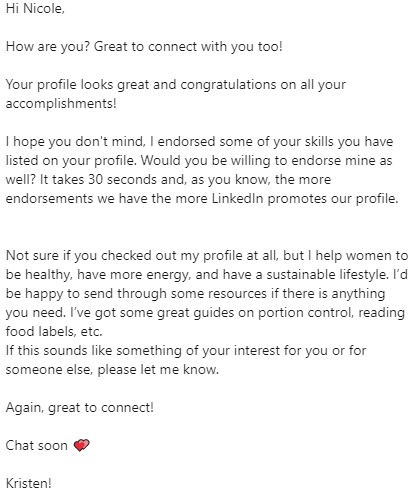 This one started off well, as this gal reached out saying we had some mutual connections. Great. I accepted the request and said hello.

The message I got back was a little strange as she says that she’s endorsed me, and asks me to do the same in return. This feels weird because I don’t know her and she doesn’t know me.

I’m all for improving LinkedIn profiles, but I’m not the type of person that hands out a recommendation unless I can stand behind it. She jumped the gun by immediately asking me to give her an endorsement, and in doing so, turned me off.

Again, this one starts off well. He mentions some common connections, and tells me why he’s reaching out. But the call to action is, “would it be a terrible idea to connect?”

Wow, talk about a lack of confidence.

I may not have thought it was a terrible idea to connect, but once he suggested it might be, that’s all I’m thinking.

I’ll also say that I actually appreciate when someone gives me a sales pitch in their connection request, because they are honest about what they want. Please don’t take that statement as an endorsement of going straight to a pitch. I say I appreciate it, because I know not to waste my time with them.

At the end of the day, reaching out on LinkedIn is all about first impressions. And some things that seem like a good idea in your head, don’t always come out so well.

A good rule of thumb is to think about it like a cocktail party. Would you walk up to someone, and say whatever it is you wrote in LinkedIn? If not, consider a rewrite.

Want more tips on what you should do on LinkedIn? Check out this video: