Ello is the latest in the line of social networks that had its moment in the spotlight, but is already drifting into obscurity. Perhaps I’m being premature, after all Ello isn’t even out of beta yet. But in my opinion Ello had a chance to shine and they let it slip away.

1. Ello Didn’t Capitalize on the Spotlight

Ello burst onto the scene in September 2014. It made headlines as the anti-Facebook and was widely embraced because of its commitment to be ad-free. The timing seemed right as Facebook was diving deeper into their pay-to-play model.

The problem was they weren’t ready.

In their defense, they were a brand new network (launched August 1), and yes still in beta, but they had momentum and they lost it. By the last week in September, they were receiving 50,000 requests to join PER HOUR. And what did they do? They froze invitations and didn’t let people in.

Yes, people were complaining of a wonky interface, but news came out on October 23 that Ello received $5.5 million in funding. I’m not sure what the heck they were doing with that money because I requested an invitation October 1, but didn’t actually get into the network until December 12. That’s two and half months!

When you have two wait 73 days, who’s still excited?

What’s more is that it seems the people on Ello have lost interest because they didn’t have anyone to talk to. Even the posts that Ello is featuring are days old and have limited interaction.

Ello “was originally built by a group of seven well-known artists and programmers” according to their website. On top of being ad-free their other big claims are being simple and beautiful.

I’ll concede that beauty is in the eye of the beholder, but there’s nothing beautiful about this platform to me. {Haven’t seen it yet? Gizmodo gives you a great peek inside.} 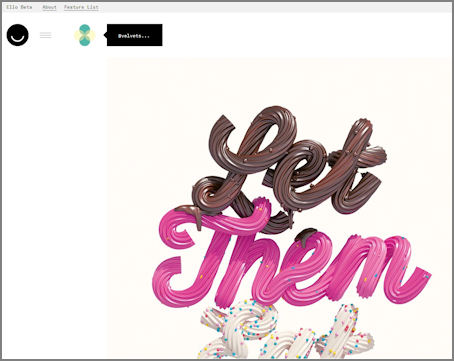 The whole site design is done in tones of black and grey, with a font that channels a typewriter. So very hipster. It ends up feeling cold and unfriendly and is not where I want to spend a lot of social time.

Perhaps where the beauty is meant to come from is user posts. In fact founder Paul Budnitz says it was built specifically to “display large images beautifully,” and truthfully it seems like the people who have found a home on Ello are artists.

The problem is that there is no sizing on the images. That means that despite my 23-inch screen I can’t see many of the images in their entirety.  See the image to the left? I didn’t crop it. That’s all that can fit on my screen, which is really too bad because there are some fun images on the site.

This my friends is not a good user experience.

3. Ello Didn’t Bring Anything New to the Table 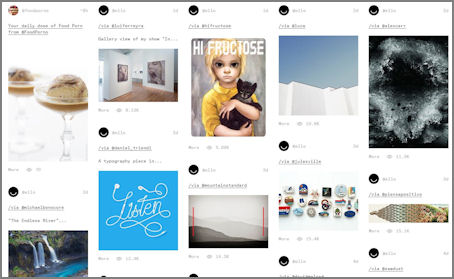 In what is possibly their biggest fault, there’s nothing special about Ello other than the ad-free gimmick. Their “Noise” feed is reminiscent of Pinterest, but you can’t interact with content while you’re in the feed – you have to actually go to each individual post, which is annoying. They took the Google+ circles concept and slimmed it down, which could be good or bad depending on your perspective.

While some might argue this is a “best of” all social networks. Many more people are happily entrenched in the social networks they already know and love, and aren’t really interested in giving them up for a buggy site without all that much content.

The good news in all of this is Ello’s creators don’t seem to be too upset. Co-founder Todd Berger wrote (on the actual site), “Ello’s not for everyone—that was never our intent.”

I don’t think we will see another social network that will ever go head-to-head with Facebook. With over 1.35 billion active users each month, no social network holds a candle to Facebook in sheer size or functionality.
The fact is that Facebook has done a stellar job of integrating itself into countless other sites and has woven itself into our world. That is both its strength and its weakness. Because Facebook is so integrated into our daily lives, it’s not cool. It’s definitely not hip when Grandma is on there.

Despite the popularity of other platforms, and an increased number of complaints around Facebook’s ads, people are still using Facebook.

In my humble opinion we will not see a single social platform pop up that will be the Facebook killer. I don’t necessarily believe that to be a bad thing. My belief is that we will continue to see social platforms pop up that concentrate on niche interests. People will spend more and more time on the smaller platforms that focus on their unique interests, but still pop on over to Facebook to share those picture with grandma.